XAIR Performance is run by owners Adam & Linda with the help of their awesome team. Adam's role is also General Manager and Linda runs Administration/Accounts.

Clint Harvey started as Head Mechanic in January 2015 and has installed all of the parts/packages in hundreds of Commodores as well as Camaros and Corvettes. From Exhausts to Superchargers to Cams to Suspension to Engines there's not much he doesn't know about these LS Engine powered machines!

Adam has always been into cars... his first driving experience in 1985 aged 11 behind the wheel of his dads manual yellow Morris Marina Van in a South Auckland paddock. He got his license as soon as he turned 15 and started out with a Honda Civic then a couple of CRX's before getting a Ford Telstar Wagon then new Ford Telstar XRI Hatch as as company cars. Adam modified all his cars in various ways but there were two things they had in common - they were all manual and lowered as far as possible!

The Hydraulics company that Adam Managed had a policy of Fords for company cars but when the Telstar was up renewal in 1998 he wanted a Wagon but found there was no Manual Falcon available. So he drove over the road from Ford Panmure to Moyes Holden and had look at the Commodore Wagon instead. Next thing there's a brand new MANUAL Bermuda Blue VT Holden Wagon on order complete with a LOT of boxes ticked... Headers, Exhaust, Chip, Pedders Suspension, Full Holden By Design Body Kit, Tinted Windows, 19" Chrome Wheels, Front Seat Upgrade and more. This was a special order build from the Holden Factory and 9 months later when it arrived in January 1999 was the first Manual VT Wagon in the country. It was the very last of the 5.0 Cast Iron Engines and had the 5 Speed Manual Getrag Gearbox. This was at the time and still is now a very unique Wagon.

In 2002 Adam got a new release Black VY SS Manual Sedan and the wagon was purchased for Linda to drive.

In 2004 Adam left his job and started XAIR Wakeboarding, they moved to Waiuku and built a shed on their property to work from designing Wakeboard Towers and other related accessories. Unfortunately the V8's had to go so Adam bought himself an old Mitsubishi Pajero and Linda got a trusty Ford Telstar... but at least the Telstar was Manual! Adam designed Wakeboard Tower Speakers and employed Steve to manufacture them in Gelcoat Fibreglass and Genuine Carbon Fibre using a split mould process. The Speaker Pods were joined in the Moulds then released as one finished part.

In 2006 the decision was made to get back into a V8 Holden! XAIR purchased Adam's favourite car from 1998, a 6 speed manual Raven Black VT GTS complete with best sounding 5.7 Stroker Engine and the awesome Colson Seats! Lowered and 20" Wheels, Adam was happy!

One of Adam's friends suggested he go and See Paul Manuel from Eastern Automotive as Paul raced an NZV8 and they modified Holden and HSV road cars as well. Eastern had nothing for the GTS as were now specialising in the LS Powered commodores. They had a Small Filter Carbon Fibre MAFLESS VT-VZ OTR Intake design for the LS Commodores which they got made locally. It was laid up as two pieces then glued together afterwards. They were having supply and quality problems so Adam suggested to Paul that XAIR could make them in one piece using the same technique as the Speaker Pods. Steve made complete new plugs and moulds from scratch and XAIR supplied Eastern Gloss Black and Carbon OTR's for VT-VZ cars including a Supercharged version and Engine covers. In late 2006 Paul purchased a VE SSV and a new OTR was designed for Eastern Auto and supplied for VE Cars.

In 2008 XAIR got a contract to supply Horsepower Factory (HP-F) in Australia so set up a new Fibreglass/Carbon production Factory with Steve in Pukekohe and via Eastern Auto XAIR exported these Airboxes to HP-F as well as other companies in Australia.

In 2009 XAIR set out to design a completely new XAIR VT-VZ OTR Intake which featured a massive oversized filter and ability to run with the MAF (Air Flow Meter) in place as well as MAFLESS. A Manual VY SS Wagon was purchased to perform OTR testing which also received a set of HSV Headers, Custom 3" Exhaust, Tein Coilover Suspension and custom painted Advanti Wheels.

Next up was a brand new XAIR OTR for VE which was also used as the Control Airbox on the new Holden, Ford and Toyota NZV8 TLX Touring cars in 2012 including the winning VE Commodore of Jason Bargwanna.

In his spare time Adam & Clint enjoy Circuit Racing and from 2009 to 2015 Adam raced a Honda CRX on a limited budget in the All Japanese Classic Series. An XAIR OTR Intake was shoehorned into the CRX which may have been a slight overkill... However he won Group 1 and the Overall ACJS Title many times as well as the Auckland Car Club Overall Most Season Points for all Classes Title where he was presented with the Trophy by Paul Radisich at the end of 2014 season.

In 2011 a body kit was installed on the XAIR black VE Calais V V8 Wagon then another version onto the manual XAIR Cammed Supercharged VE SSV. Over the next few years (and a lot more cars) new products were added including trialing/developing new suspension and wheels. XAIR has always been Pro New Zealand Made and in 2012 got together with one of New Zealands top Plastic Moulding Company's and tooled up to produce the XAIR OTR's in Plastic. A new Plastic OTR Intake to fit the VE V6 was also produced as well as the Camaro and more recently the new Gen F LSA Supercharged version. Soon after came the Tracksport series kits which included the manufacture of a new Twin Nostril / Twin Exit Vent Bonnet for VF as well as Coil Over Suspension with Custom length and Weight Springs to get the VE/VF as low as possible. In the meantime Adam and Linda's sons Zak and Ryan were growing up fast, Zak loves his cars and in 2016 aged 8 Adam let him design his own Manual VF SS Commodore. In Zaks words it had to be "Black, Low, Fast and as Loud as possible with the Biggest Wheels" which he called the ZAK X410. This car also had the newly developed XAIR custom Cannon Exhaust Rear Mufflers, XAIR Custom Grind Camshaft as well as Alcon V8 Supercar Brakes!

In 2014 after demand from customers a car sales division was launched called XAIR Performance Vehicles. This catered for customers who wanted to buy XAIR modified cars finished ready to go. XAIR never builds two cars exactly the same so you know your ride is unique.

In 2015 demand for the cars had ramped up significantly so Adam employed fellow All Classic Japanese Race Series friend Clint Harvey as XAIR's Head Workshop Mechanic. Clint is super passionate about his Commodores having owned several himself including a Group A spec VK. He installs all XAIR Camshafts as well as Supercharger Kits, Custom Exhausts, Lowering plus was also set up in a Holden Crewman to offer customers the convenience of Mobile Servicing.

In 2016 the opportunity came up to purchase a NZV8 VY Commodore NZ Touring Car which runs the LS3 Engine complete with control part XAIR OTR Carbon Fibre Intake. This was the original Radio Sport Car campaigned by Darren Henderson. James McLaughlan converted the car to the control LS3 Engine and raced it in the NZ Touring Series in 2014 where it was parity tuned against Brock Cooley's Falcon by Andre at Speedtech. It runs a full Supercar Spec ChromeMoly Cage, Watts Linkage Rear End, Jerico 4 Speed Dog Box, Performance Friction Brakes and Motec Dash etc. Adam asked his friend Clint Bridger who designed the Livery for the Red Bull and previous Vodafone Triple 8 V8 Supercars to come up with a design for the Commodore. Clint who also designed the original XAIR Performance Logo used the XAIR Black and Red Colourway and came up with a period relevant design basing it off the K Mart Murph/Kelly Bathurst Winning Supercar. Adam has done some track testing and three Auckland Car Club Events in the Commodore but unfortunately there's been a lot of failures in the car to date. So far the Diff and Chassis has been straightened, Gearbox rebuilt, Driveshaft rebuilt and recently the Steering failed causing a big off at Turn 1 Pukekohe. Adam hopes to compete in some of the NZV8 rounds this year.

From 2017 there were a lot of new projects undertaken including an all Steel Widebody VE Commodore (see cars and body kits section) as well as becoming a stockist/distributor for Whipple Superchargers with specialist kits in stock for VE/VF Commodore. In 2020 due to strong customer demand for the Power Package Upgrades two additional units at 92 John Street were leased, now for 2022 XAIR has a 4th Unit so a has a dedicated Parts Shops, Fabrication Shop and Car Showroom with customer Lounge as well as full Automotive Car Workshop. 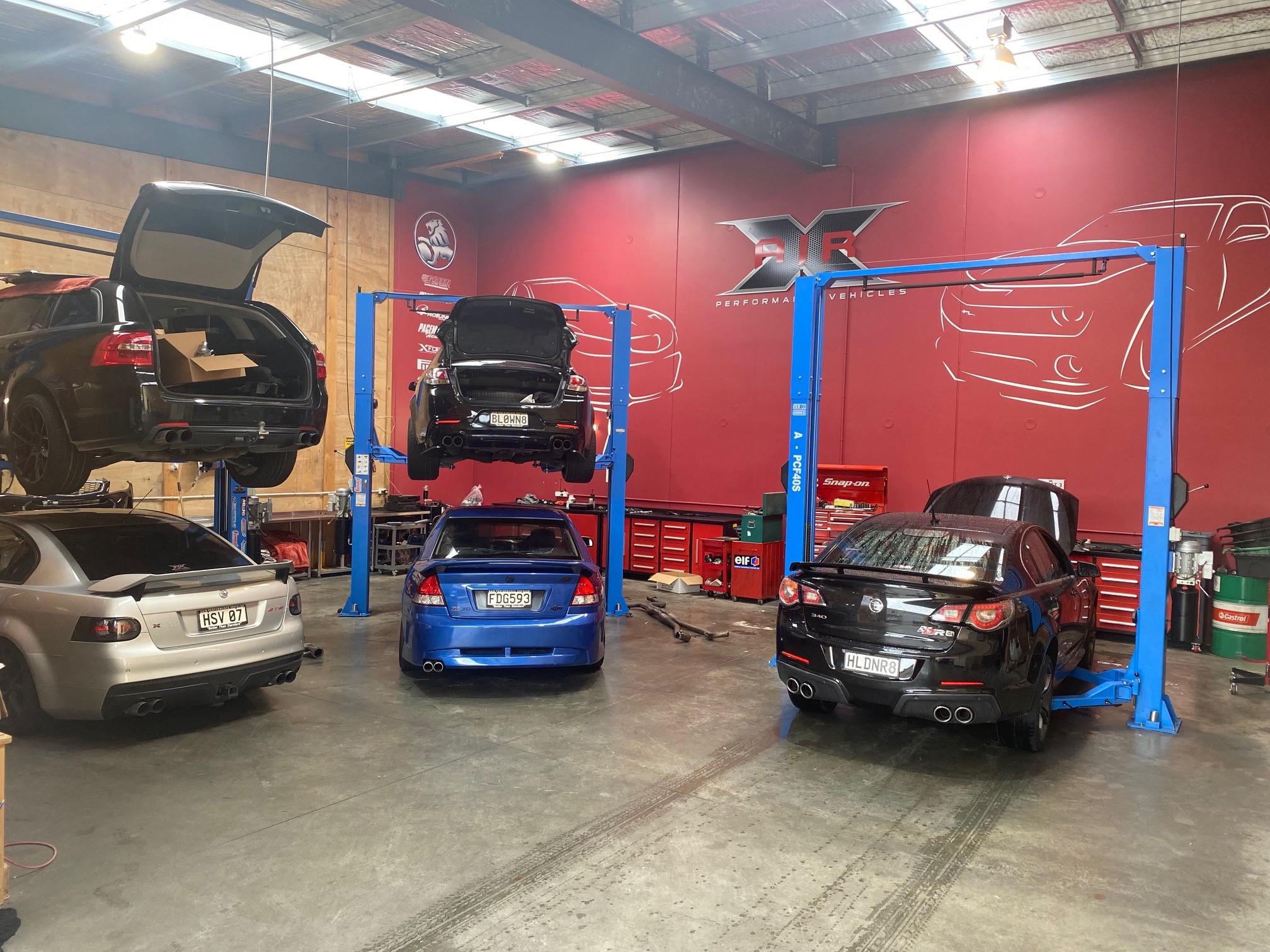